With this cab, called  V2-Boa, Valhallir-owner Andy has fullfilled his personal dream.

Andy ripped off the old Tolex (which was painted in black) , grinded the surface (what a frakkin’ job) and loaded the cab with some great speakers, after additional bracings and

acoustic improvements. And he tolex’d it with blood-red Snakeskin tolex, which led to her new name “V2-Boa” and quickly it became Andy’s favorite cab for his progmetal-band Chaos Inside

Let’s talk about the speakers:

Speaker A is a Celestion®   T75  from 1987, with 1777 Kurt Mueller Cone. This version is very different to it’s modern versions, as there is less scoop and a better overall midrange

as known (and often hated) from the new China-made models.

Speaker D is a US-made Scumback® by Weber  SA12H-75-16 from 2005, developed from guitar speaker-legend  Ted Weber for Scumback, to obtain the legendary Pulsonic-cone sound, paired with

a  modern charakter. Let’s say: G12-H30 on testosterone! Truly a highlight in this cab!

possible mix-cab. You need  some “Überkab-Flavour”? Mix The T75 with the Veteran30 IRs. You wanna go Mesa Roadking- or Halfback style? Take the G12-80. You would love some Orange-like G12-H30 Pulsonic mojo? Give the Scumback H75 a go.

The following microphones have been used and abused for this cab pack:

How does V2-Boa sound? Let Al River’s guitars do the talking:

Mr. “Tone” Marco Fanton is also having big fun with our V2-Boa:

And here’s a nice one from Steven. He’s the guitarist from Austria’s Alternative Rockband “Nine Lives” with some A-Smith:

Here we go with Hal West from the Austrian Rockband CIL CITY! 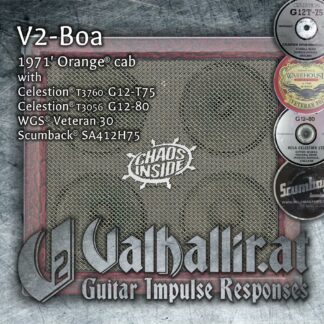