The V2-Wolverine is a sophistically built custom-cab and loaded with  WH-80 “Wolverines”, which were produced in 1998 from Celestion™ for Marshall™ to the specs of guitarist Geoff Whitehorn. 2000 pcs. had been produced, and they were used in only two open-back combo-amplifiers to drop off the face of the earth.

Mounted in an elaborately constructed closed back, 18 mm birch-plywood-cabinet (overall weight 35 kg)  and after several acoustic improvements and intensive testing, the Wolverine is absolutely unique.

With their 80 watts,  heavy 80 oz magnets and a vintage coils they are perfect for any style of music –  from ultra low-tuned heavy stuff to funky clean a ‘la Stevie Ray.

As a special feature we included shots from an additional, completely unused pair of Wolverines, that we found in the studio of a tchech rock guitarist in 2019. So we can say that this is the most versatile cab pack of a 2×12 cabinet, that we have EVER made! The IRs with the + mark the worn in pair of WH-80’s, whereas the IRs without can be identified as the “virgin-wolves”

Highs without sizzeling, power without compression, perfect mids – this cab is balanced beyond recognition. It’s the “baby” from Valhallir owner Andy and  is used in his progressive metal band  CHAOS INSIDE in the studio and live as his personal IR-pack. 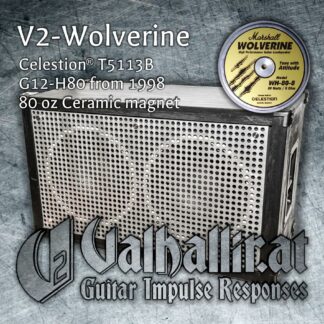